A spectacular start to the new season

Once again, the Grande Dame has come up to scratch! Not only have bookings flowed in for the start of the 2013 sailing season, but Belem has already made the news and graced our TV screens - as well as a special P.O. stamp - with her very active presence at the inauguration of the elegant Jacques Chaban Delmas Bridge in Bordeaux last month. And what a spectacular ceremony that was, in the presence of the President of the Republic and of Alain Juppé, Mayor of Bordeaux. She was cheered on as she sailed under the bridge with her cohort of naval escorts by a crowd of thousands who had obviously cast off their usually composed and flegmatic attitude inherited from a long history of British presence in Bordeaux... The photos of the occasion are an absolute must!  Click here 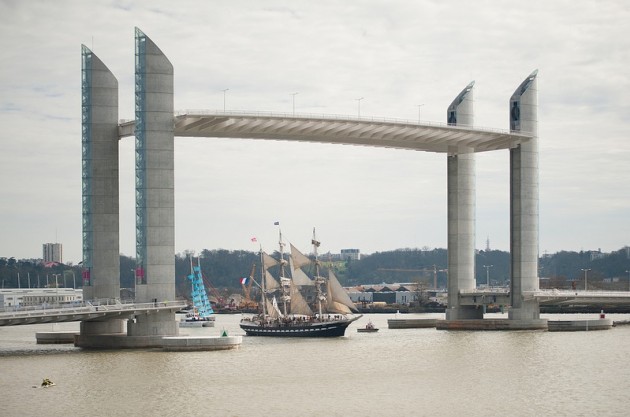 Right now, it's a school ship well and truly booked to the hilt that is doing what she loves so well : taking trainees on exciting, busy and fulfilling trips along the Atlantic coast on the seas she was made to sail before making another successful appearance at a crowd-drawing event, the "Escale de Dunkerque" at the end of May. But more about that next month...

So, I hear people ask, if bookings are going so well, where can we still fit in? Well, there are still bookings available for the Lisbonne, Tanger, Alicante round trip between July 24th and August 9th; there are also two new training trips available between the 7th and 13th of October 7th linking Toulon and Sète on the Med. So click here  ...fast!

There are also a serie of public visits during the season, including those organized during various festivities such as the "Armada de Rouen" - in Rouen of course! - or the "Sail Den Helder" in the Netherlands before Belem takes off for the Mediterranean part of her season. And it is really worth trying to at least come and see her on all these occasions because she will not be doing any more Atlantic or North Sea trips until...August 2014. Why not? Well, remember...Venice, next year? Exactly! Oh, and one last bit of good news before we sign off for this month: the ever-growing public attention that Belem is attracting and creating a very positive impulse for well known brands to link their names with that of our beautiful ship; gastronomy, fashion, design, these are the fields where it's all coming together. Naturally, the Foundation is committed to linking Belem's image with the best there is to offer in terms of quality, care and style. Here again, more will be divulged when the time comes and new products appear in the Belem Boutique.